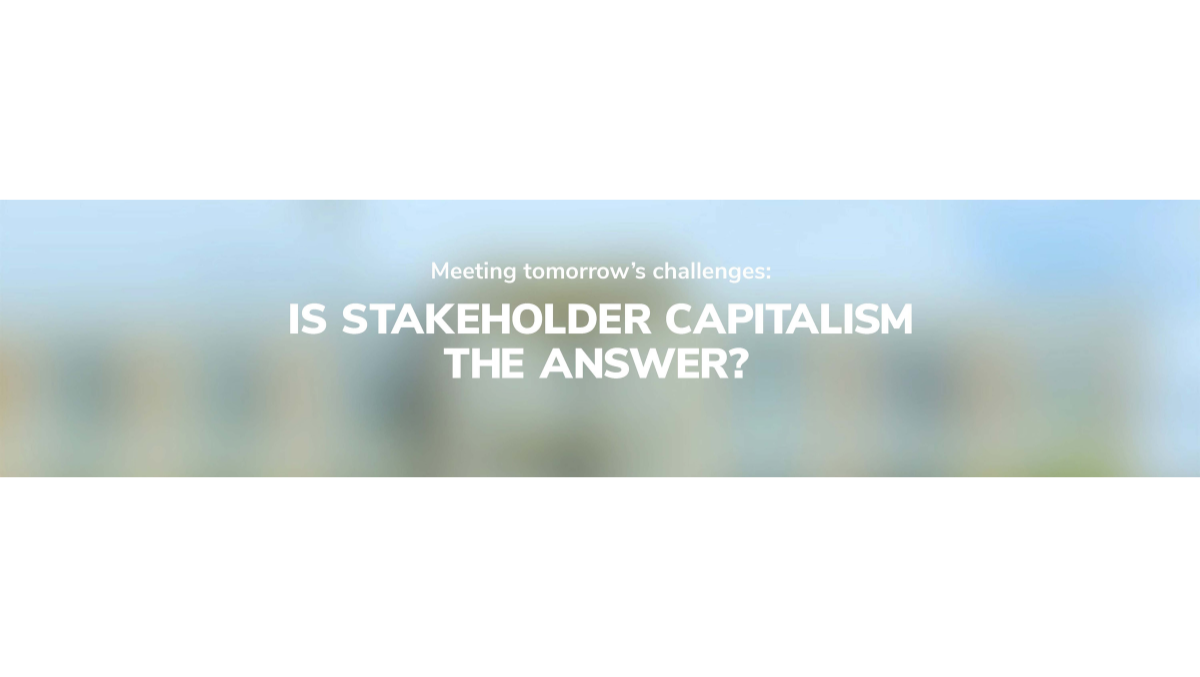 What kind of economic system do we need for a sustainable future? At the networking event Meeting tomorrow’s challenges: Is stakeholder capitalism the answer? we will examine this question with you and our speakers. Policymakers, experts, business leaders, investors, and the stakeholders of the future will explore what the expansion of value diversity and inclusion means for organizations and for society. How can companies, investors, and governments achieve environment, social, and governance (ESG) objectives? What do we have to do to make economic system more diverse, equitable, and inclusive? How do we measure success?

Michael Kellner, parliamentary state secretary at the Federal Ministry for Economic Affairs and Climate Action, will set the stage with a keynote. Panel participants include Katharina Beck, member of the German Bundestag and financial policy spokesperson of Bündnis 90/Die Grünen, Frank Engels, member of the executive board of Union Asset Management Holding, Christian Felber, co-initiator of the Gemeinwohl-Ökonomie movement, and Stefan Hartung, chair of the board of management, Robert Bosch GmbH. Insights from a real-time experiment with students, held in the afternoon before the event, will enrich the discussion. The event will be moderated by Monika Jones, Deutsche Welle.

Katharina Beck has been a member of the German Bundestag for Hamburg since 2021 and is the financial policy spokesperson for the Bündnis 90/Die Grünen parliamentary group. Before entering the Bundestag, she worked as a management consultant for sustainability with DAX corporations and their board members and as a supervisory board member in an educational fintech. Katharina Beck focuses on sustainability and aims to adapt the framework conditions so that social economic activity within planetary boundaries finally pays off.

Dr. Frank Engels has been a member of the executive board of Union Asset Management Holding since July 2022. As chief investment officer, he is responsible for securities portfolio management. Previously, he has held different positions at DWS, Union Investment, Barclays Capital, the European Central Bank, and the International Monetary Fund, among others. Frank Engels studied economics at Johannes Gutenberg University in Mainz and earned his doctorate at WHU Otto Beisheim School of Management and Georgetown University (USA).

Dr. Stefan Hartung has been chair of the board of management of Robert Bosch GmbH and a shareholder of Robert Bosch Industrietreuhand KG since January 1, 2022. His responsibilities include corporate strategy, corporate communications and governmental affairs, and technology development. Stefan Hartung studied mechanical engineering, specializing in manufacturing technology, at RWTH Aachen, where he also submitted his PhD (Dr.-Ing.) in 1993. He joined Bosch und Siemens Hausgeräte GmbH in Munich in 2004. Before that, he worked for the Fraunhofer Society and the management consultants McKinsey & Company in Düsseldorf.

Michael Kellner has been a member of the German Bundestag since 2021 and parliamentary state secretary at the Federal Ministry for Economic Affairs and Climate Action since December 2021. As such, he is the federal commissioner for SMEs. From October 2013 to January 2022 Michael Kellner was the federal political director of BÜNDNIS 90/DIE GRÜNEN and member of the federal executive committee. He studied political science in Potsdam, Canterbury (UK) and East Lansing (USA).

Monika Jones is one of the leading bilingual journalists and presenters in Germany. As an English speaking news anchor at Germany’s global TV broadcaster, Deutsche Welle, she is familiar to a wide international audience, especially in North America, Asia, Africa and the Middle East. Monika Jones is also one of Germany’s leading bilingual presenters of international conferences and business events. Her regular clients include top multinational companies, government ministries, European institutions and NGOs.

ESMT Berlin
info@esmt.org
+4930212310
https://faculty-research.esmt.berlin/
ESMT Berlin is the highest-ranked business school in Germany and Top 10 in Europe. Founded by 25 leading global companies, ESMT offers master’s, MBA, and PhD programs, as well as executive education on its campus in Berlin, in locations around the world, online, and in online blended format. Focusing on leadership, innovation, and analytics, its diverse faculty publishes outstanding research in top academic journals. Additionally, the international business school provides an interdisciplinary platform for discourse between politics, business, and academia. ESMT is a non-profit private institution of higher education, accredited by AACSB, AMBA, EQUIS, and FIBAA, and is committed to diversity, equity, and inclusion across all its activities and communities.